Gear up for the newest mixed residential and commercial development that will be unveiled soon next to Buangkok MRT to inject vibrancy and variety to the current retail landscape.

Sengkang Grand Residences Integrated Development @ Buangkok brought to you by the joint venture of renowned developers CapitaLand and CDL. This joint venture is set to transform the 3.7-hectare site – the largest commercial and residential site awarded since 2015 – into an integrated community hub with 680 residential apartments, meeting the needs of residents in Buangkok with amenities such as a hawker centre, community club, childcare centre, retail shops, as well as Buangkok MRT and bus transport facilities sited in a one-stop location.

The mixed-use development will have an integrated community and transport hub with a bus interchange on the first storey, a hawker centre on the second storey and a community club that spans across three storeys. Part of the well-conceived design strategy is also where the existing park is extended to the community through a series of public spaces. A “Green High Line” which is an accessible Garden Ramp will allow residents and park users direct and seamless access from Compassvale Ancilla Park to the 2nd storey hawker centre. There will also be a “Linear Park” designed with play areas and street furniture with an Outdoor Activity Plaza along the entire frontage of the development, enhancing a sense of place for its visitors. A Community Plaza that is located in the heart of the development will be an attractive, naturally ventilated sheltered public space that can accommodate a wide range of activities from organised events to informal gatherings.

Plans are on the way to shape and transform Sengkang Grand Residences Integrated Development @ Buangkok into a landmark development that will be an identity marker and new focal point for the Buangkok neighbourhood. Various amenities and recreational facilities such as a hawker centre, childcare centre and civic plaza will be right at residents’ doorsteps, giving rise to a vibrant and bustling community.

Strategically located at the Sengkang central, Sengkang Grand Residences Integrated Development @ Buangkok is well connected by major arterial roads and expressways, being approximately minutes’ drive away from CBD via CTE/KPE and Airport via TPE.

Apart from being self-contained with retail outlets, Sengkang Grand Residences Integrated Development @ Buangkok is of close proximity to Punggol Digital District which will open progressively from 2023, creating about 28,000 new jobs and offer residents additional dining, leisure and retail spots. The Punggol Digital District will also be the first in Singapore to adopt an integrated masterplan approach that combines amenities for the community with a business park and a university — the Singapore Institute of Technology (SIT). 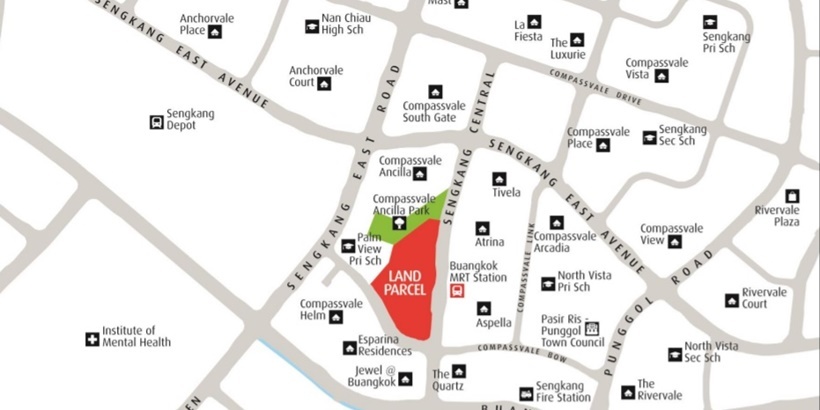